A True Chronicle of the

On April 24, 2013, Feng Xingkui, Deputy Director of Sichuan Provincial Administration of Traditional Chinese Medicine, and Fang Qing, Head of the Medical Administration Division, visited Baoxing to guide the earthquake relief efforts in person. In addition to expressing his gratitude to the medical team.Director Feng fully affirmed our company's race against time and unity of medical rescue work for the victims. With the direct instruction from Director Feng, a TCM emergency medical team was established on April 26, which was made up of Sichuan 2nd Hospital of TCM, TCM Hospital of Ya'an, Baoxing County Health Bureau, and Sichuan NGP. On the morning of that day, it toured the camps of the troops in Baoxing County to provide medical services. The emergency medical team arrived in order at the camps of Chengdu Military General Hospital Medical Team, Chengdu Military No. 37 Hospital, Affiliated Hospital of the Armed Police Logistics College, and Chengdu Military Iron Fist Division Pioneer Regiment, where they diagnosed, prescribed for soldiers. On April 27, the TCM Hospital Attached to Luzhou Medical College and the TCM Hospital of Ya'an took part in this TCM emergency medical team. In the afternoon of the same day, Director Li of Baoxing County Health Bureau, accompanied by Lai Mei, our Deputy General Manager, visited the Chengdu S.W.A.T. force and Sichuan Armed Police Squadron stationed in Baoxing County. In the front line of earthquake relief, many soldiers in camouflage uniforms suffered from eczema, colds, diarrhea and other diseases due to the harsh environment and living condition. In response to this circumstance, the experts of the emergency medical team immediately  prescribed a TCM prescription, and our headquarter’s colleagues worked through the night to prepare 6,000  doses of preventive drugs, which were delivered to the soldiers the next day. With the drug box, love from NGP has also delivered to the soldiers, which provided a guarantee to maintain their effectiveness for disaster relief.

"Undoubtedly, TCM has been a great help in the earthquake relief to solve the national crisis," said Chen Wenhua, vice governor of Sichuan Province.

On April 23, Sichuan Provincial Administration of Traditional Chinese Medicine learned that a large number of human and material resources are concentrated in Lushan County, while the lack of rescue supplies in Baoxing County because of road disruptions, so it urgently ordered rescue teams to move to the hardest-hit Baoxing County. Our company responded positively and obeyed the unified command of Sichuan Provincial Administration of Traditional Chinese Medicine to give full support to the disaster area by sending one more mobile emergency TCM pharmacy van. At 7:00 a.m. on April 23, Zhang Shijun, Director of the Department of Acupuncture and Moxibustion of Sichuan 2nd Hospital of TCM, led a medical team and a mobile emergency TCM pharmacy van into the hardest-hit Baoxing County at the first available opportunity after the road from Lushan to Baoxing was cleared. The medical team risked the fine fallen rocks from the aftershock along the way, rushed through several landslides and finally arrived at Lingguan Town at 10:00 am. In the afternoon, in response to a coordinated request from the Baoxing County Hospital of TCM, the medical team moved to Muping Town to provide medical services. At the medical service point of Muping Town Health Center, our company's mobile emergency TCM pharmacy van got local people's attention. "I only knew that western medicine could be distributed through a vehicle, but I didn't expect that traditional Chinese medicine could help the disaster area for emergency!" said a disaster victim who had taken TCM formula granules and was in surprise. 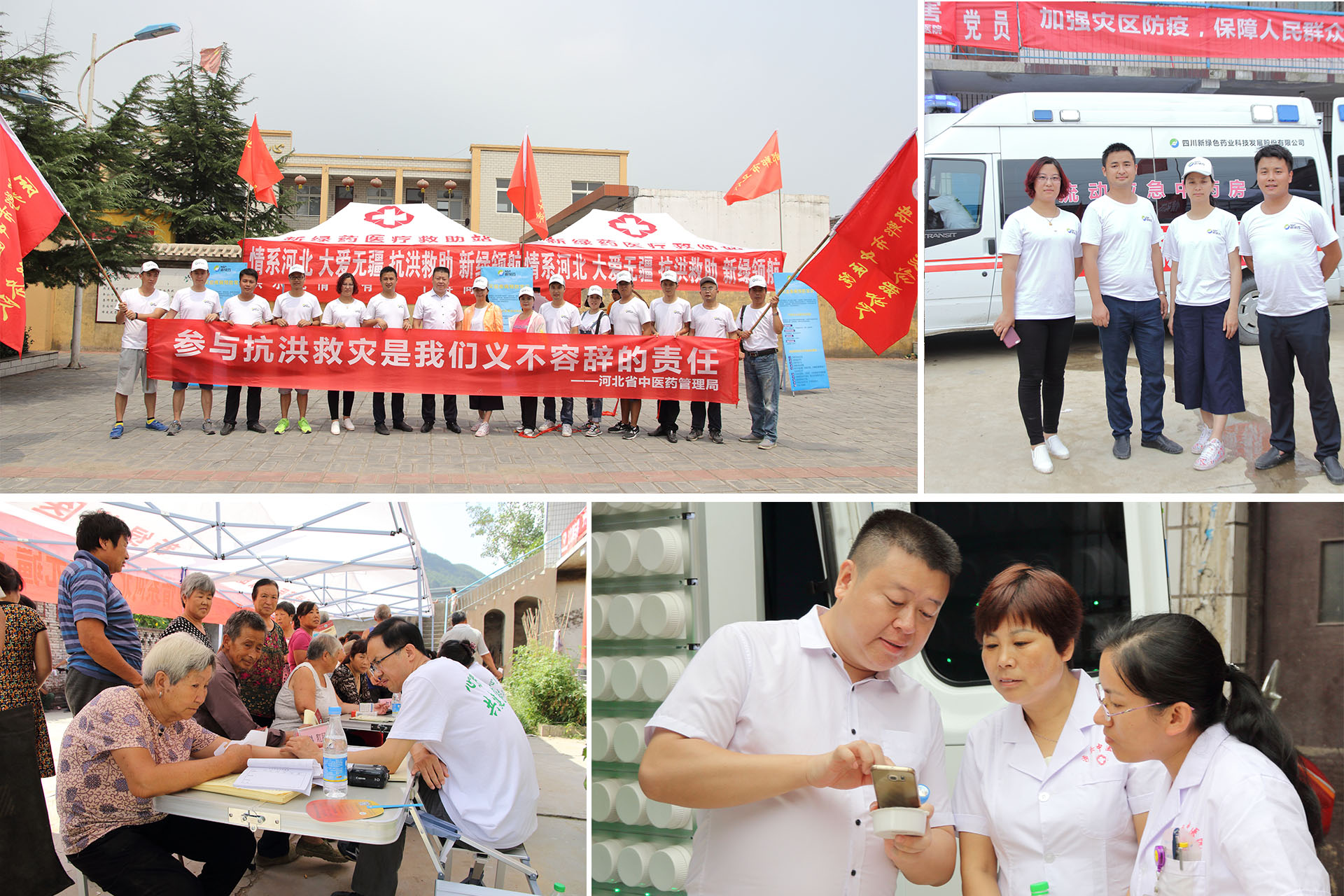 In July 2017, NGP formed the "care for Hunan beyond physical border" aid team. From July 4 to July 10, the team went to Hunan to provide medical and pharmaceutical services to help the disaster areas, locations such as Yiyang, Taojiang, Ningxiang, Liuyang, Changsha, Yongzhou, and Huaihua thus benefited. The team completed its planned aid mission in Xiaoxiang, providing free medical services and drugs to people in the disaster area, and donating materials with an accumulated value of more than RMB 2 million. 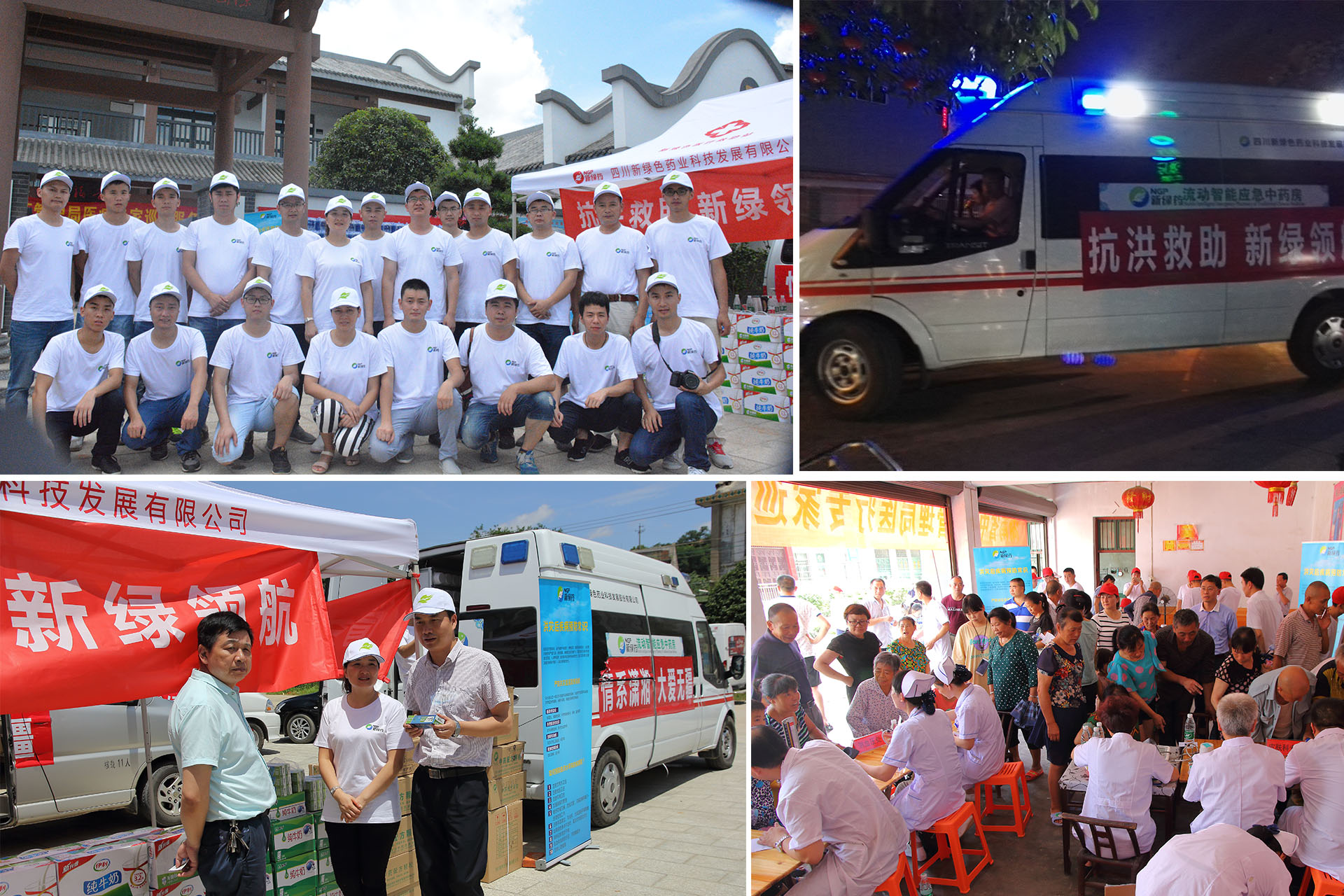 From July 31 to August 1, 2017, the NGP flood rescue team took a mobile relief approach to run around Zizhou and Suide counties in Shaanxi. The team distributed free milk, bread, 84 disinfectant solution and masks, etc. The team also distributed drug granules such as exterior strengthening and anti-cold granules, Xiao Chaihu Tang, prescription for painful diarrhea, thirst relief granules, anti-heat granules, and granules for external use on the skin to the victims based on the results of on-site expert diagnosis. By the evening of August 1, NGP had donated RMB 150,000 worth of living supplies and RMB 310,000 of TCM formula granules for the victims, and provided medical diagnosis for 562 people. This "care for Shaanxi beyond physical border" relief operation for the flooding in Shaanxi is another planned aid mission after the one in Hunan in July.

At 22:55 on June 17, 2019, a 6.0 magnitude earthquake occurred in Changning County, Yibin City, Sichuan, with a depth of 16 km. This earthquake was felt in Sichuan, Chongqing, Yunnan, Guizhou and many other places. As of 6:00 on June 19, 2019, the 6.0 magnitude earthquake in Changning, Sichuan has caused 168,000 people affected, 13 deaths, 199 injuries, and 15,897 residents urgently relocated. NGP was the first to respond to the call of the National Administration of Traditional Chinese Medicine and Sichuan Provincial Administration of Traditional Chinese Medicine, and under the leadership of the party committee and labor union, it act quickly to form the "care for Changning earthquake relief" volunteer service fleet. The first group of nine workers left for the disaster area at 19:33 on June 18 with Mobile Emergency Smart Pharmacies for TCM developed by NGP and the fleet loaded with relief supplies. At 6:30 a.m. on June 19, NGP Party Committee Member Gao Yongbo led the second group of workers, a total of four people, to Yibin by morning train, arriving at 9:00 a.m. at Shuanghe Health Center in Shuanghe Town, Changning County, where they met with a rescue team consisting of an expert and ten medical personnel from Changning County Hospital of TCM. After that all of them threw themselves into the rescue efforts. 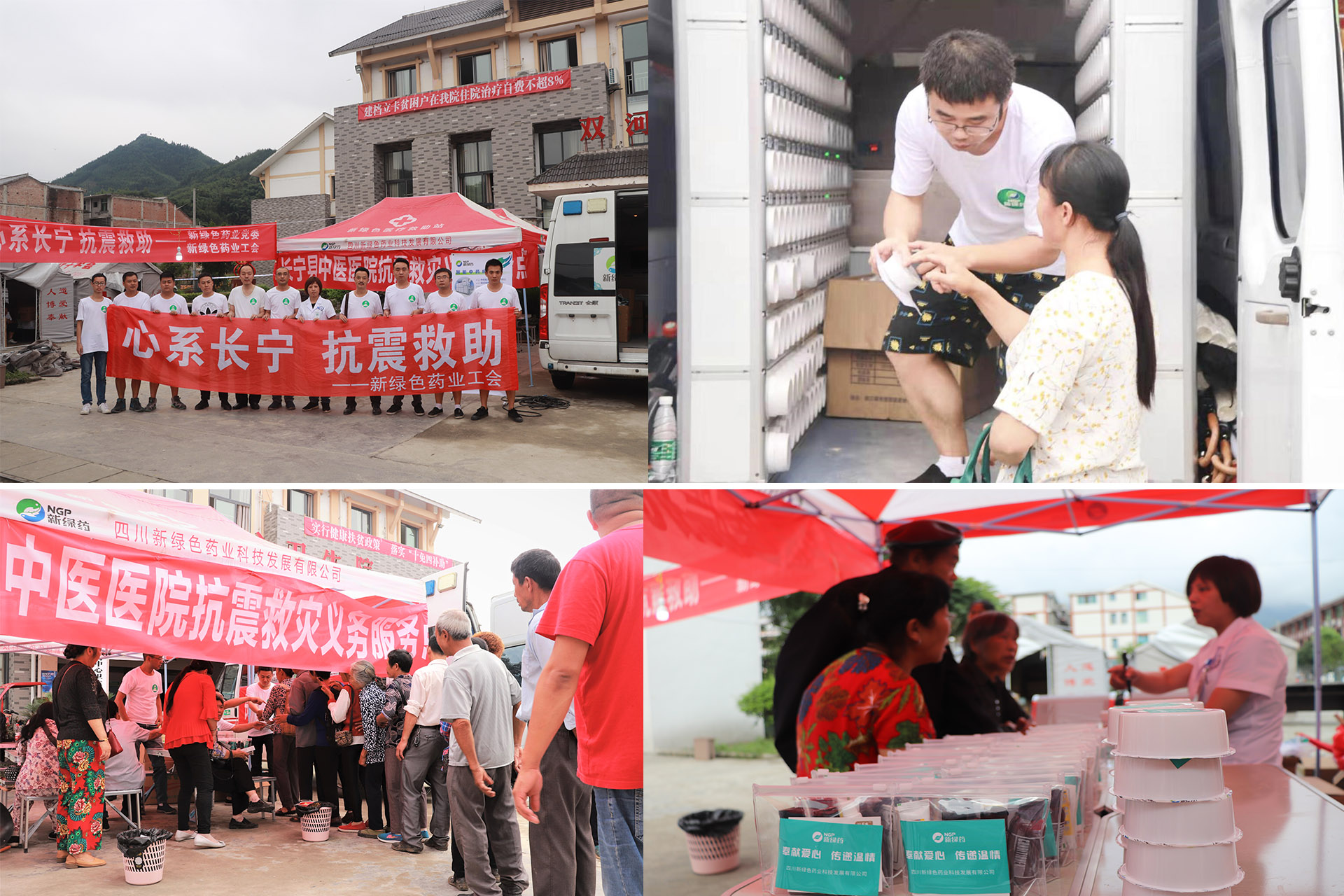